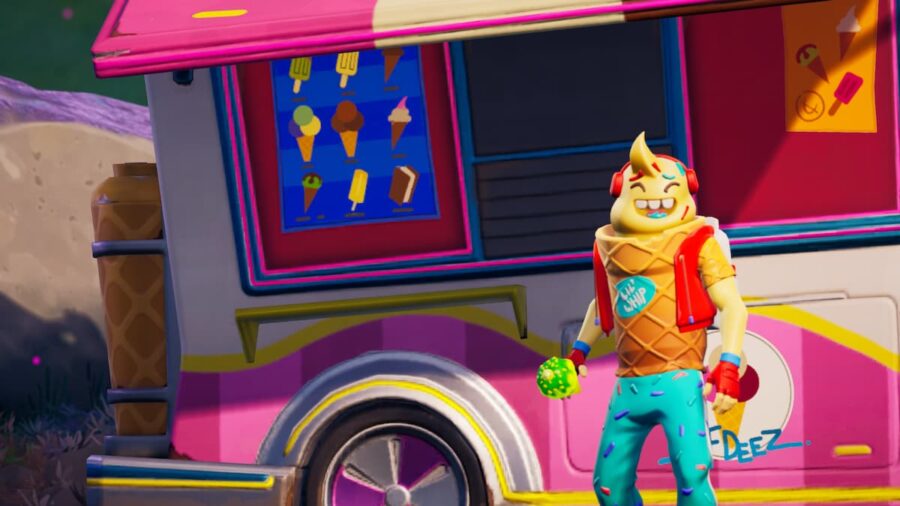 Fortnite has plenty of silly and helpful NPCs spread around the map in various locations, and as you find each one, they are added to your collections page. New NPCs are constantly being brought into the world, each with their unique style (and sometimes, quests). These NPCs usually provide items, such as healing, weapons, and rifts that can be bought for gold bars. They may even be available to hire to fight alongside you. As the map changes, some recognizable characters may switch their usual location––such as the lovable ice cream NPC, Lil Whip.

Where to find Lil Whip in Fortnite

Lil Whip was found in the Ice Cream parlor in Coney Crossroads, but he has now taken to the road in his ice cream truck. He can be found in a few different locations, and instead of providing his usual services, he can now be seen tossing free ice cream at any players nearby. These ice cream cones supply players with a few different effects, like ice block shoes, chili-pepper speed, shield, or health. Here are the locations where you can find:

Related: How to find the coolest player on the island in Fortnite

Why can't you find Lil Whip at these locations?

Like a few other NPCs, Lil Whip doesn't always spawn at the exact location every round. These are all possible locations for Lil Whip to spawn, but there is no guarantee he will be in the one you try to land in. It may take you a few different matches to locate him, especially with so many possible spots for him to appear. Keep trying, and he will eventually spawn in the next few games.

Make sure to keep checking in for updates to this page in the future. Lil Whip may end up in different locations as the map changes, and we will list them here as he does. Comment below if you were able to find him!

Looking for more Pro Game Guides Fortnite content? Check out our guides on Where are the Geysers in Fortnite? All Geyser Locations (Chapter 3) or How to get the Wolverine Zero Skin in Fortnite!

Where does Lil Whip spawn in Fortnite? (August 2022)